SNF472 is a selective calcification inhibitor with a novel mechanism of action. SNF472 inhibits the development and progression of ectopic calcifications by binding to the growth sites of hydroxyapatite (HAP) crystals, the main component of calcification deposits, and in doing so blocks the formation and growth of HAP crystals in blood vessels, preventing CVC. 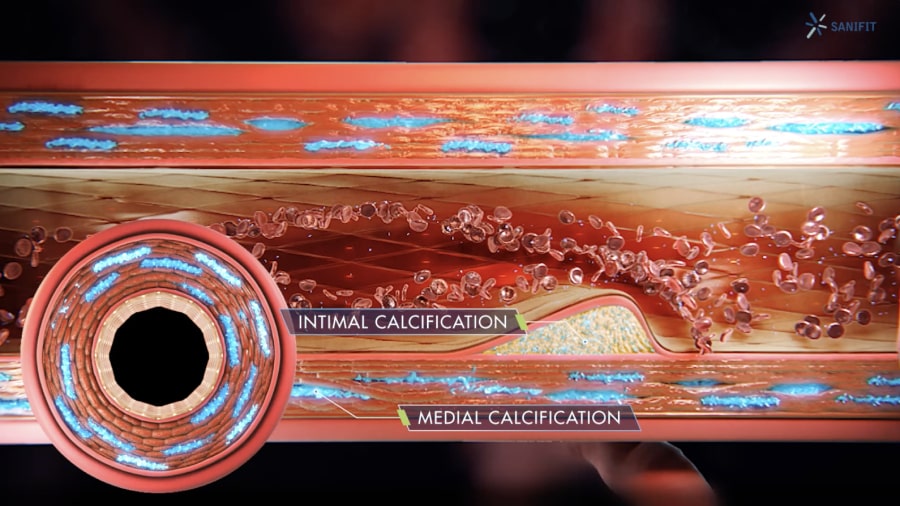 SNF472 FOR TREATMENT OF CALCIPHYLAXIS

CKD, a progressive and long-term condition where the kidneys do not work effectively, is a large and growing problem among aging populations. Once the disease has progressed to ESKD, kidney failure is permanent and irreversible, and the patient requires renal replacement therapy through dialysis or a renal transplant.

The metabolic and hormonal abnormalities in ESKD lead to a chronic state of inflammation, malnutrition, disordered mineral metabolism, anemia, and electrolyte disturbances. These conditions cause calcium deposits to form in the cardiovascular system of patients with ESKD, which can lead to cardiovascular diseases.

Calciphylaxis is a severe form of CVC in which the calcium deposits block small blood vessels in skin and fat tissue. These blockages cause the development of intensely painful and debilitating chronic skin lesions. Calciphylaxis is a devastating rare disease that affects 1-4% of dialysis patients and has a 1-year mortality rate of 55%.

Infections and other wound-related complications are leading causes of morbidity and hospitalization in patients with calciphylaxis. Patients are usually treated with pain medications and wound management but there are no approved therapies to address the underlying cause of the disease. SNF472 inhibits pathological CVC and has the potential to offer an innovative solution for this devastating condition.

Sanifit has obtained orphan drug status from the FDA and EMA for SNF472 as an investigational treatment for calciphylaxis. In an open-label Phase 2 study of calciphylaxis, improvements in wound healing, pain, and wound-related quality of life were observed after 12 weeks of SNF472 therapy. Sanifit successfully completed end-of-phase 2 regulatory interactions with the FDA and EMA and a placebo-controlled Phase 3 study is underway.

CaLIPSO: PHASE 2b STUDY IN DIALYSIS PATIENTS ASSESSED THE EFFECT OF SNF472 IN REDUCING CVC PROGRESSION

Sanifit conducted the Phase 2b CaLIPSO study in dialysis patients as a mechanistic proof of concept to evaluate the effect of SNF472 in reducing CVC progression by inhibiting HAP crystallization in blood vessels. SNF472 significantly reduced progression of CVC, the primary endpoint, in patients with ESKD receiving hemodialysis. SNF472 treated patients had coronary artery calcium volume score progression of 11% from baseline to week 52 versus 20% in patients receiving placebo (p=0.016). SNF472 was well tolerated and adverse events were similar for the SNF472 treated patients compared to those receiving placebo. For more information please refer to:  clinicaltrials.gov/ct2/show/NCT02966028?term=sanifit&rank=1.

HAP crystallization is the final common pathway of CVC-related diseases, such as calciphylaxis and Peripheral Arterial Disease.

Peripheral artery disease (PAD) in end-stage kidney disease (ESKD) affects patients who depend on ongoing renal replacement therapy, most commonly hemodialysis. PAD causes patients to reduce their mobility, have pain in lower extremities, and can lead to chronic limb threatening ischemia and amputation. Although atherosclerosis is prevalent in ESKD patients, one distinguishing feature of PAD in ESKD is a profound degree of calcification observed in the arterial tree, including peripheral arteries. The final step in pathophysiology of arterial
calcification and a key etiological factor of PAD is the accelerated deposition of calcium phosphate in the form of hydroxyapatite in the peripheral arteries in the lower extremities. This calcification causes narrowing and stiffening of arteries which results in obstruction to arterial flow and distal ischemia. Risk factors for PAD in ESKD include older age, diabetes, hypertension, and smoking. The duration of dialysis is an important risk factor; hypertension and diabetes are more prevalent and more difficult to control in patients with ESKD than in the general population. PAD prevalence in patients on chronic hemodialysis has been reported to be as high as 37%.

PAD in ESKD can present with exertional leg muscle pain termed intermittent claudication which can lead to significant, lifestyle limiting symptoms. In 10-15% of such patients with intermittent claudication, progression to severe ischemia will occur. Such severe ischemia can present with foot pain at rest and/or tissue loss ranging from ulceration to frank gangrene. Patients may also not report symptoms initially and have self-imposed mobility limitations. Advanced PAD can present as acute limb ischemia, defined as sudden severe limb hypoperfusion, or chronic limb-threatening ischemia. Chronic limb-threatening ischemia is characterized by ischemic pain in the foot at rest lasting >2 weeks, non-healing wounds, and gangrene and it is associated with a high amputation risk.

There are no approved medical therapies for PAD in ESKD. Prior randomized controlled trials of PAD therapies excluded patients with ESKD as these patients were seen as a different, more difficult to treat group with higher mortality. Thus, treatment in PAD-ESKD is based on extrapolation of results from the general PAD population.

Two drugs have been approved by the FDA for the treatment of intermittent claudication in PAD: pentoxifylline (1984) and cilostazol (1999). Neither drug has been studied in a randomized controlled trial in hemodialysis patients. Pentoxifylline is not recommended in current treatment guidelines for any PAD population due to lack of evidence of efficacy. Cilostazol is strongly recommended according to the American College of Cardiology/American Heart Association guidelines for treatment of claudication in the general PAD population (Gerhard-Herman, 2017). However, cilostazol use requires caution in chronic kidney disease due to high protein binding and impaired excretion and prescription rates are extremely low, with only 2.0% of PAD-ESKD patients receiving cilostazol. Studies of structured exercise programs, an important element of care in the general PAD population, have also excluded ESKD patients with PAD.

There is a high unmet need for medical therapies to treat ESKD patients with PAD, a population with uniquely high morbidity and mortality.