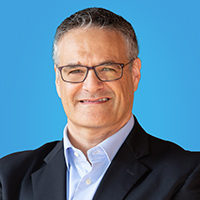 Larry is a pediatric cardiologist with drug development experience in cardiovascular and rare diseases in addition to several other therapeutic areas. He has held executive roles and has led teams, activities, and projects that have advanced drugs through development including to approval and commercialization. Before joining Sanifit Larry was VP of clinical development at Altavant Sciences. Prior to Altavant he was VP and Head of the Cardiovascular Center of Excellence at IQVIA. He held prior clinical and medical leadership roles at GlaxoSmithKline, Aldagen, Kos Pharmaceuticals, and Pfizer.

Larry completed an internship and residency in pediatrics at The New York Hospital-Cornell Medical Center and a fellowship in pediatric cardiology at Children’s Hospital of Michigan. He became board certified in pediatrics and pediatric cardiology and is a fellow of the American College of Cardiology. He earned his M.D. at The George Washington University and a M.S. in physiology at Georgetown University. He also received management and leadership training at Ross School of Business at University of Michigan.