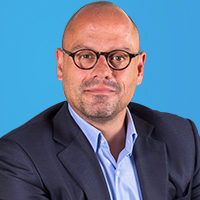 Joël is managing partner and co-founder of Ysios Capital. Previously, he co-founded Glycart Biotechnology in 2001 and was its CEO until the company was successfully sold to F. Hoffmann La-Roche four years later.

Glycart Biotechnology was the originator of the anti-CD20 antibody – obinituzumab/Gazyva®, the first breakthrough designated drug approved by the FDA for B-CLL. He holds an MS in Biotechnology and a PhD from the Swiss Federal Institute of Technology (ETH) in Zurich.

Joël is currently on the boards of  directors of Adcendo, LAVA Therapeutics, Ona Therapeutics, SpliceBio  Executive Chairman of Inbiomotion, and board observer at AM-Pharma.

He has been Chairman of the board of Cellerix/Tigenix (now Takeda), board member of Aura Biosciences and board observer at Biovex (now Amgen). Joël has earned numerous awards, including the Wall Street Journal’s Europe Innovation Award in 2001.

SNF472 featured in AHA Journal’s Circulation on the Run podcast